The growing significance of nanotechnology has now led to the development of nano bubbles, which is drawing a lot of attention from a variety of fields. Nano bubbles play a vital role in many sectors that include scientific research, medical and food sectors. This article will talk about the properties, applications and recent developments related to nano bubbles.

The small size of nano bubbles gives them much more interesting properties than larger bubbles, due to their high specific area and high stagnation features in the liquid phase. Free-radical generation occurs when micro- and nano-sized bubbles collapse due to the high density of ions at the gas-liquid interface that develops prior to the collapse.

It has been shown that nano-bubbles cannot remain in a stable state under atmospheric pressure due to extremely high internal pressure. Following a number of experiments, it has been suggested that the typical lifespan for a gas bubble with 100nm radius would be around 100 µs. 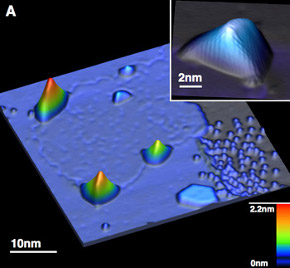 Some of the applications of nano bubbles which have been explored to date are listed below:

Physicists in the Netherlands recently demonstrated the prolonged stability of nano bubbles on wet surfaces - their nano bubbles remained stable for several days. These physicists went on to compare these tiny bubbles to the bubbles found in a champagne or beer glass. They arrived at a conclusion that the longevity of these bubbles is mainly because of two significant physical properties:

Researchers at UC Berkeley discovered that graphene can sprout nano bubbles which make electrons behave as though they are moving in a very strong magnetic field. This image shows nano bubbles formed in a graphene patch on a platinum substrate. Image Credits: UC Berkeley News Center.

·       Nano bubbles Becoming the Subject of an Increasing Amount of Study

·       Nano wires Defined - What Nano wires Are, What They Are Made From and How They Are Used

Physicists from the Lawrence Berkeley National Laboratory and UC Berkeley discovered that nano bubbles can be formed when graphene is stretches in a particular manner. Nano bubbles formed in this way will have electrons that behave in a very strange manner - as if they were moving in a very strong magnetic field.

Recently, the medical field has also seen major discoveries relating to nano bubbles. Researchers from the University of Texas MD Anderson Cancer Center, Rice University and Baylor College of Medicine are concentrating on the development of new techniques to directly inject genetic payloads and drugs into cancer cells.

In another experiment, scientists at Rice University developed a cancer treatment technique using lasers to zap nanoparticles inside the cells, creating nano bubbles. These nano bubbles are formed when the short laser pulses strike the gold nanoparticles, and cause damage to the cancer cells. This experiment was focused on identifying and treating cancer cells in the initial stages.

All these discoveries highlight the wide spread applications of nano bubbles in various fields. Nano bubbles due to their very small size and high stability can be very useful in treating cancer, simplifying technical operations and can even act as a nutritional supplement carrier in the food industry. These applications emphasize the growing significance and demand for nanobubbles in all walks of life.